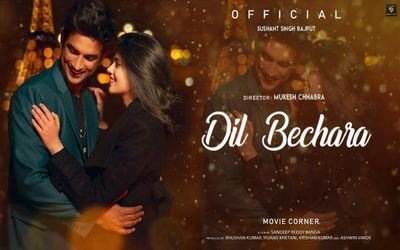 5 Facts You Should Know About Dil Bechara movie

5 Facts You Should Know About dil bechara movie. The movie has already become no 1 as most liked trailer in youtube.

After the death of Sushant Singh Rajput this is his first movie to be released in digital platform.

The songs are composed by A R Rahaman with lyrics penned by Amitabh Bhattacharya.The sound track consists of nine melodious compositions and the recorded level is sony music india.

In this movie Mukesh Chhabra started his debut as film director.Hestarted the film in October 2017.He also announce the adaption of of John Green’s 2012 novel The Fault in Our Stars.Sushant Singh Rajput acted as male lead. Later 2018 A R Rahaman agreed for composing the song tracks.

Later Later, the debutant artist Sanjana Sanghi was selected as female lead opposite Rajput and Sony Music India acquired the music rights. Amitabh Bhattacharya has penned all 9 songs of the movie.

Chhabra has to stop the work as he was being accused of sexual harassment in October 2018. After that charbra got a clean chit from ICC on the allegations and returned to work. This results in delay of the films post production work.

The official movie trailer of the film released on YouTube by sony music on 6th July 2020.It has immediately became the most liked trailer and within 24 hours it has got 4.8 million likes.And in this course It has overtook the trailer of

Following to the Sushant Singh Rajput’s death Fox Star Studios has announced the movie official realease date to be 24th july 2020. It will be streamed free irrespective of any subscription.

Filming of the Film

The shooting of the film began on 9 July 2018 in Jamshedpur Jharkhand. On 29 August 2018 Farha Khan shot a song on Sushant Singh Rajput and the remnaining portion of shooting of last schedule had been filmed accross Paris & switzerland.

This was later reaveled as Title song Del Bechara of the movie and the most amazing fact is that the song has been filmed at a single take by Sushant Singh Rajput with just one day of reharsal.Farha khan also done the choreography witheout any payment.

The primarily titled of the film was Kizie Aur Manny, and in February 2019 the title was officially changed to Dil Bechara.