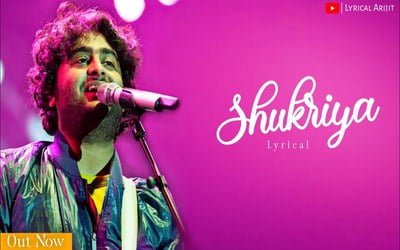 Shukriya Rendition Lyrics Jeet Ganguly Arijit Singh. A controversial track for which allegations has been made that Mahesh Bhatt has been allegedly removed the Arijit Singh version of this song.After strong opposition from social media where netizens blammed for Mahesh Bhatt for addition of this with his so many wrong doings.

This is a heart breaking track from the song composer of the film Jeet Ganguly. In the song the three lead actors of the film  Sanjay Dutt, Alia Bhatt and Aditya Roy Kapur dealing with heavy-heart and appreciating life for the happenings it provided them.

As per Jeet Ganguli he is about to record the song before Covid -19 pandemic with Arijit Singh. But as Arijith was then his native place Jiaganj , Murshidabad he was not carrying the instruments. Hence the recording was not done and eventually it gets delayed.

Mujhme Sab Hai Sab Kuch Main Hoon
Everything within me , I am everything
Jeena Marna Baatein Hai
Life & death is facts
Mujhme Dono Chaand Aur Suraj
These two are moon & sun for me
Mujhse Din Aur Raatein Hai
Day & nights are for me

Shukriya Shukriya!
Thank you Thanks to you